Baylor University has been part of the Dominy family for more than five decades. David Dominy, BBA ’82, and his son Drake, BBA ’10, are just two members of the Dominy clan who have earned Baylor degrees. Don’t forget David’s wife Kimberly, BBA ’84, his son Dalton, BBA ’12, and daughter Kirstyn, a junior at Baylor, who will soon graduate as well. And that doesn’t even count extended family members.

“Baylor has been a family tradition dating back to my grandfather, who graduated in 1957,” Drake said. “Baylor has always been a home for me since I visited for Homecoming when I was young.” 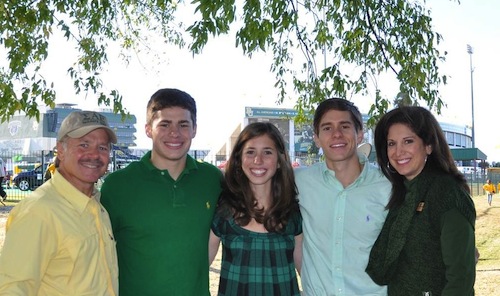 Real estate has also become a family tradition. David followed in his father’s footsteps and worked in commercial appraisal before joining a firm that was starting up a multi-family development arm. Within six years, David helped the firm develop 5,600 apartment units.

“My father started his own commercial valuation firm 50 years ago in 1962,” David said.  “Although I first intended to enter the medical field, I changed to business and pursued accounting and finance, which I knew would play a key role in my goal of real estate development.”

David joined his father’s firm in 1990, and continued to build and diversify the firm following his father’s retirement in 1995. In 1999, David became a founding member of Integra Realty Resources (IRR), which now includes 63 offices and is the largest independent valuation and consulting firm in the U.S. He serves as managing director of the Houston office and as vice chairman of the national IRR organization.

Drake found his niche in the real estate industry as well and works as a broker for Swearingen Realty Group in Dallas.

“Swearingen focuses primarily on representing tenants in office lease transactions,” Drake said. “As a broker I provide the expertise of finding a tenant the most efficient office space to meet their requirements and negotiate beneficial lease terms.”

While they both attended Baylor and work in real estate, David and Drake’s entrances into the workforce were separated by 28 years and major innovations — the most apparent being technology.

“There is no comparison in the availability of information in 2010 versus 1982,” David said. “The computer class I was required to take included punch cards. Now, online information allows for a much more transparent and educated opportunity search.”

“I found out about my current position through a listing on Baylor’s Hire-a-Bear website,” Drake said. “The ability to search a company’s website and access recent company news is an advantage. On the flip side, companies expect you to be up-to-date on what is going on in their business.”

Although technology has changed the job search, economic conditions are prone to cyclic patterns.

“In my opinion, the job market for real estate in 2010 was very similar to the market in 1982,” David said. “In both cases financing sources were scarce and new development was non-existent. The trickle down from this lack of activity pervades most areas related to real estate.”

As new graduates continue to enter the workforce, Drake emphasized the importance of networking.

“Relationships are important in every field,” Drake said. “A company may not have the opening that you are looking for today, but it is important to foster relationships for future opportunities.”

David added that first impressions are just as critical as they were in the ‘80s.

“Perception can and should become reality,” David said. “How you present yourself in the first meeting will establish the tone of the interview and/or negotiation. A great attitude can overcome some shortcomings, but a bad attitude can be a cancer to a company.”

Back to Bears in the Workforce