Home / Fall 2020: Wired for the Future of Finance / Mr. Hall Goes to Washington (and Beyond)

Mr. Hall Goes to Washington (and Beyond)

There is an old saying that opportunities do not just happen, you make them. But Andrew Hall believes it takes more than a single person to capitalize on an opportunity. It also takes a blessing.

Hall was born and raised in San Antonio, attending a small private school. His brother, Nathan, attended and graduated from Baylor in 2014. When it came time to pick a college, there was not much of a debate.

“Just seeing his experience and how much he enjoyed Baylor made my choice pretty easy,” Hall said. “Baylor was actually the only school I applied to!”

When he arrived in Waco in the fall of 2017, Hall decided to study business and pre-med. However, as an opportunity arose in the spring of his freshman year, he would soon move his focus to business. 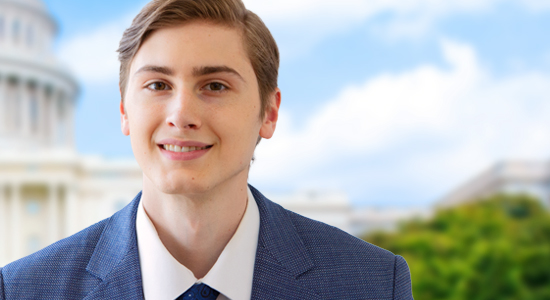 Andrew Hall, BBA ’21
Business Fellows/Finance
San Antonio, Texas
Hall found out about the Baylor in Washington program, which sends Baylor students to the nation’s capital for internships and coursework. The professional experience gained through the program excited him, but the added value of being close to his brother—who had started working in D.C. for Family Research Council—made this opportunity too good to pass up. After doing some research on potential internships, Hall submitted his application in the fall of his sophomore year and was selected for the program in the spring of 2019.

Students are responsible for securing their own internships, Hall said, but Baylor provided plenty of resources to help.

“Baylor in Washington does a really good job of giving you suggestions and connecting you with Baylor grads who are at various departments in D.C.,” he said. “Because it is during the semester, there is less competition, so you are more likely to land a really good opportunity.”

Hall was set to start with at the Securities and Exchange Commission (SEC), but that opportunity was put on hold due to a government shutdown. A Baylor graduate working in the Office of Congressman Jim Hagedorn (MN) was able to bring Hall in as an intern, where he would research legislation, draft letters on policies and provide information to constituents.

One month into his time in Washington, the shutdown ended and Hall was able to begin interning with the SEC. His role there varied from the creation of an internal reference guide to coordinating with several agencies, including market intelligence, records management and project management groups.

“It was an incredible opportunity to gain professional experience, to be in a new city and be with the people who run it,” Hall said. “Outside of Texas, D.C. has the largest Baylor network. Having so many Baylor connections and so many people who want to help you made this program an awesome experience for me.”

The opportunities didn’t stop at the end of the Baylor in Washington program. The semester before he left for D.C., Hall was approached by his advisor about a summer honor’s program in New York City. Hall’s original internship plan in Houston had fallen through, so he jumped at the possibility to get further out of his comfort zone.

Hall was accepted into the Meraki Honor’s Program in Finance at the King’s College, one of only five students selected to participate. A requirement within the program was for Hall to get an internship and yet again connections helped out.

“The program director reached out to me and mentioned Archegos Capital Management,” he said. “I had a phone interview with them and I felt like I was handed this great opportunity.”

Hall enjoyed Archegos. The family investment firm had a unique culture, he said. Many of the employees, including management, strived to incorporate their Christian faith into their work. Hall said it was an incredible experience for him to engage in such an environment.

While everything seemed to be working out for Hall, he admits his time in New York was not without struggles. His internship was remarkable but he felt like he did not belong at times. He almost developed an inferiority complex due to the fact that many of his fellow interns were from Ivy League schools.

“I somewhat felt like I did not really deserve it, but I quickly put that behind me,” Hall said. “I just had to tell myself that I was there, all I could do was work hard and do the best job I could. And that is what I did.”

Hall believes he has been very fortunate for the opportunities he had during college. He knows it was not just his hard work and dedication that made it all possible either.

“I could not have had any of those opportunities if it were not for Baylor and the people I have met through Baylor in Washington and the Hankamer School of Business,” he said. “That is the great thing about Baylor. If you are willing to put in the effort and do your part, there are so many people waiting to help.”

As for the future, Hall has considered seminary or possibly vocational ministry. He hopes to one day be able to incorporate his faith and his knowledge of finance to build a business on love, service and helping society, whatever that business may be. But he knows that whatever lies ahead, it is because of the opportunities he has been blessed with.

“I was really fortunate to have experienced all of this, but I know I did not earn it by myself,” he said. “This has been a blessing from God and from others. I am just fortunate to be able to capitalize on it.”